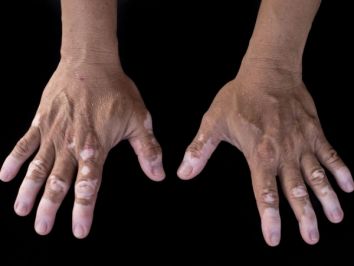 Vitiligo is essentially an autoimmune dermatological condition that is often associated with stress. For still unknown reasons, the organism itself sends out its own 'defence' cells and damage or destroy melanocytes in some areas of the epidermis. Unfortunately, although it is not contagious, this condition carries a stigma especially in dark skinned patients with extensive and obvious white patches.

Treatment for vitiligo takes time and it is therefore important to explain certain things. Firstly, the inital goal of therapy is to stop the spread. We then proceed to re-pigment the affected areas. Success in this second therapy stage depends on the extent, type of vitiligo and time since its appearance. A non extensive vitiligo that is recent has a much better prognosis. Also important is the location of the white patches. Vitiligo in the face is easier to treat than vitiligo in the hands and fingers.

The patient has an even better prognosis when he presents before vitiligo is fully developed, when there is a state of reduced pigmentation. In this case, as in the case of established vitiligo it is important to do certain blood tests, including a check for other associated autoimmune conditions, such as thyroiditis.

Vitiligo is also a condition that we have shown an active research interest over the years and we have four original publications in established international journals.

Lead by our research interest we develop our therapeutic regimes. However, the most important thing to stress is that therapy almost always takes time and is based to a large extent on patient compliance. Unfortunately, there is still no quick solution to vitiligo.

Finally in certain cases, we can use micro-surgical techniques for pigment restoration.