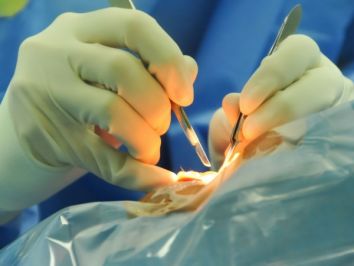 A bleeding 'mole' is sometimes a warning bell that leads a patient to our practice.

Skin cancer is perhaps the 'best' form of cancer one may get! It may sound strange and even macabre, but the fact is that skin cancers are almost always treated with a simple excision that leads to a cure. This may be perhaps since it is not hidden in some internal organ, allowing us to diagnose it early, before it grows and gives rise to metastases. However, this requires a patient that watches over his/her skin and comes for a skin check up. Surgical removal usually takes minutes, does not require a hospital and is common practice in our surgery.

The most common skin cancer and the most common form of cancer in general is the basal cell carcinoma (BCC). It comes in different forms, ranging from an ulceration, that is often confused with a non healing injury, to a small growth. It appears in sun exposed areas, where there are also hair follicles. It is thought to derive from cells originating from the hair root. A critical factor is chronic sun exposure over our lifetime and fortunatelly it is a slow grower. Metastases are extremelly rare and are reported in cases that ignored a very obvious lesion destroying significant skin surface. However, some forms of BCC may hi-jack a neighbouring small nerve and 'travel' within it away from the main lesion. It occurs very often on the face, especially on the nose and for this reason apart from the correct diagnosis it is important to remove it totally. Sometimes it requires significant knowledge and experience to achieve this and also get an optimal esthetic result.

The second most common skin cancer is the squamous cell carcinoma (SCC), which originates from epidermal cells. Once again, sun exposure is critical and it may occur everywhere on the body and face. However, this type of cancer is characteristic of the mucosae e.g. lower lip. Also, it may appear on a pre-existing scar or on an area that has received radiation in the past. This type of cancer is more aggressive than the basal cell carcinoma and may give rise to lymph node metastases, especially if it is ignored. Lesion size and its histological differentiation (on biopsy) are critical to establish the margins used for the surgical removal.

A common lesion that may lead to a squamous cell carcinoma is the Actinic Keratosis. This appears commonly on the face and on bald heads! It used to be categorised as a pre-cancerous lesion, while now it is considered a form of in-situ carcinoma. This means a form of cancer that originates and stays in the epidermis. Actinic Keratoses can be dealt with with other, non surgical  ways after a close dermatological examination.

The third form of skin cancer we will discuss is the notorious melanoma. It is the most serious of the three and thankfully the least common. Unfortunatelly however, it is not so uncommon and it troubles us every year. The fact that it may give rise to metastases and even lead to death, underline the importance of a timely diagnosis and surgical treatment. This alone gives rise to a cure rate above 90%. Every year we hear many things about which moles are dangerous but the reality is that advice is useful only as a from of increasing public awareness, since correct diagnosis is not always an easy process even for colleagues of other specialties, especially for early lesions, which are the main goal. This is why it is crucial to get a skin check by a dermatologist. Even more difficult is sometimes to reassure a patient that has been terrified with no reason and to prevent the removal of a lesion that needs not be removed for medical reasons.

The only safe advice we can give aside from the need to have a mole check every so often or in some cases on specific time periods, is to visit us if you have noticed any change occurring in one of your moles.